There are some childhood memories that you would rather not relive, and there are others that you cling onto for dear life. Sitting down with my family on a dreary Sunday, watching Matilda for the first time by the warmth of the roaring fire, is one of those memories I cling onto.

Pre-Harry Potter heptalogy, Roald Dahl’s series of works was my go-to reading material. Of all of his narratives, Matilda was the one that I felt the strongest towards. Perhaps because it featured a female heroine, or because I felt a connection to the character of Miss Honey. Perhaps it was merely for more trivial reasons (#iwishicouldperformmagic). Whatever the reason, it held me captivated, and had me read, and re-read the book umpteen times. When I finally had the chance to view the screen adaptation, I was again hooked.

Be childlike, but never act childish

After a number of years, the novelty of watching the same movie over and over wore off. I couldn’t tell you the last time I read, or even watched, Matilda. But that didn’t mean I lost interest in the story at all. In fact, I was giddy at the knowledge that one of our talented Perth locals, Tim Minchim (of who I have long been a fan of), was working on a stage adaption of one of my childhood favourites. The news broke years ago, and for years I had been wanting to see Matilda the Musical. My brother and I even tried to go and see it in London back in December of 2011. We failed miserably.

Now, five years on, I can finally say that I have seen the highly acclaimed musical, Matilda!

Ahead of it’s arrival in Perth on February 28th, I was flown to Brisbane to experience all of the Matilda magic. As a big fan of musicals, I knew I wasn’t going to be hard to impress, but Matilda far exceeded my high expectations. In fact, it pushed Wicked out of the top spot on my favourites list!

While the stage version didn’t read exactly as the book or film did, the storyline was equally as beautiful. The often simple set let the acting, singing and dancing speak for itself. The nostalgia, the incredibly clever lyrical composition that I know and love from Tim, and the super talented cast, made me laugh, cry and crawl with goosebumps. I don’t think you could wipe the grin from my face the entire performance.

Not only was I able to finally see the show I had waited so long to see, but I also got to meet some of the cast, before Elisa McCann (Miss Honey) took us on a guided back stage tour. It is safe to say that I was totally in my element, and no costume nor question went untouched. Having my nosy questions answered was just the cream on the cake to a truly magical experience.

Matilda the Musical arrives in Perth on February 28th and will be showing at the Crown Theatre until May 7th. Book your tickets online now! 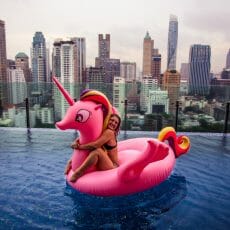